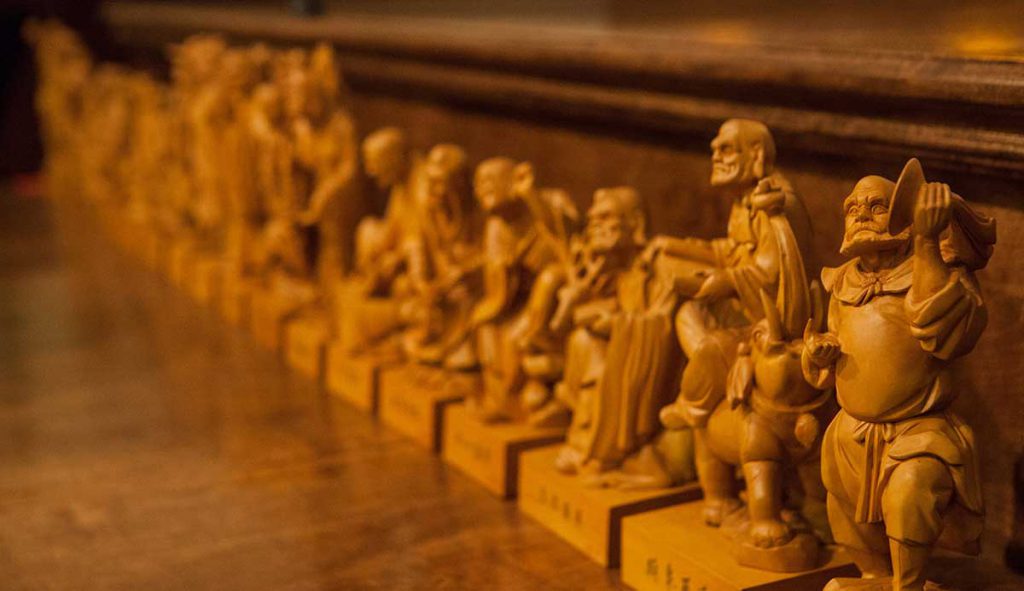 The Master was lecturing to all practitioners and he said, “The Buddha is pure and clear. He has four kinds of purity and clarity. They are as followings: To stabilize the mind is to hold the precept; holding the precept is able to obtain Samadhi; when obtaining Samadhi, the inner wisdom will evolve. What is to stabilize the mind? What is the precept?

If the mind of sentient beings in the six realms is pure without lust, they can end the cycle of birth and death. First, if those practitioners who do not eliminate the attachment to lust want to practice Zen meditation, it is just like one cooks sands and stones and wishes those cooked sands and stones can become a rice meal. Even if you have cooked for hundreds and thousands of eons, at the end, they are just a pot of hot rice. Why is that? It is because the sand and stone are not the nature of rice. If you use the lusting body and want to obtain the fruit of Buddhahood and even if you attain the wonderful state of enlightenment, all you get is the root of lust. Originally, it is lust. You will never get out of the reincarnation cycle of the lower three realms.

In addition, if practitioners do not eradicate the attachment of killing, they are just like those who put stoppers in their ears and cry out loud wish no one to hear them. This means that the more you want to cover up, the more you reveal. So as bhikkhus with pure mind, when they walk on the uneven road with stones and rocks, they do not want to step on the live grass, don’t mention to pull it out with hands. How can they say that they have great compassion and they are the disciples of Shakymuni Buddha if they eat fleshes of sentient beings to satisfy their desires for food?

Moreover, those practitioners who do not eradicate the attachment of stealing are like ones try to add water into a bucket with holes and wish they could fill up the bucket. It is never going to fill up the bucket even with many eons. So, it is just like what all bhikkhus do. Take clothes and materials enough for your need; do not store a bit of the remaining. When begging for food and having some left over, leave the rest of food offering to all sentient beings that are in hunger.

Furthermore, if sentient beings in the six realms do not violate the precepts of killing, stealing and sexual misconduct, they complete these three conducts. But if they commit lying, the state of Samadhi is not going to be clear and pure. It is like that one tries to carve human feces into the shape of sandal wood. Even he/she wants to have the fragrance of sandalwood, it never happens.

When the attachments of killing, stealing, sexual misconduct and lying have been eliminated, the practice of Precept, Samadhi and Prajna is naturally clear and pure. It is like clouds in the universe are dispersed; it is also like waves in the sea become clear. When our practice reaches this status, we are ready to engage in Zen and practice the Way.

You may ask, “How to engage in Zen? How to practice the Way?” There are many examples from the past! The master generously shares several stories as below.

Koan One
When the second Patriarch, Hui-Ke, went to the Shao-Ling Temple to respectfully visit Master Bodhidharma, he had his arm cut off, stood in the snow, and cried with sincerity in order to obtain the Dharma. Master Bodhidharma asked him, “All Buddha, at the beginning when asking for the Dharma, sacrifice their physical body to obtain the Dharma. Now, you have your arm cut off, which also shows your determination to obtain the Dharma.” The second Patriarch asked, “Would you please tell me what the Dharma seal of all Buddha is?” The Bodhidharma replied, “The Dharma seal of all Buddhas cannot be obtained from people.” The second Patriarch then asked again, “My mind is not secure. I am begging you, the Master, to secure my mind.” Bodhidharma replied, “Bring your mind to me and then I will secure your mind.” The second patriarch answered, “I am searching for my mind but I cannot find it after all.” Bodhidharma said to him, “Now, I have already secured your mind.” At that moment, the second patriarch achieved enlightenment.

So, this is the first example of engaging in Zen and practicing the Way by sacrificing one’s physical body for the Dharma.

Koan Two
The Zen Master Da Mei Chang asked Master Ma Zu, “What is Buddha?” Master Ma Zu replied, “Mind is Buddha.” So, Master Chang got the idea and directly went to the Mountain Da Mei to build and stay in a hovel there.

This is the second example of engaging in Zen and practicing the Way by having a strong faith and a mind without any doubts.

Koan Three
At first, Master Lin Ji studied and practiced under Master Huang Bo’s guidance and teaching. He practiced absorbedly. Once, the chief in the Zen hall asked him, “How long have you been here?” Master Lin Ji replied, “Three years.” The chief asked again, “Have you ever asked people questions about your practice?” Master Lin Ji replied, “ Not yet, I do not know what to ask.” The chief said, “Why don’t you go to see the Abbot and ask him what the meaning of the Buddha’s teaching is?” So, Master Lin Ji went to see the Abbot, but Master Huang Bo hit him before he finished his question. Like this way, Master Lin Ji asked three times and was hit three times! Master Lin Ji then told the chief, saying, “I am grateful for your kindness. You suggest me to ask the Abbot a question. I asked for three times and was hit for three times. I am very regretful that I cannot realize the true meaning of the Dharma because of the incurred karma and hindrance. I am leaving today.” The chief then said, “Before leaving, you should go to see the Abbot to take leave.”

The chief went to see the Abbot first, saying, “The young man Lin Ji who came to ask you questions practice in accordance with the Dharma. If he comes to you for taking leave, please guide him through. In the future, he will become a big tree, which is able to provide a shade for practitioners in the entire world.” Master Lin Ji came to see Master Huang Bo for leaving. Master Huang Bo said, “You should not go to other places. You only go to visit Master Da Yu at the shore of Gao An.”

This is the third example of engaging in Zen and practicing the Way by having a deep and right cause from previous lifetime and having a sharp capacity.

Koan Four
When Zen Master Chang Qing Ling had not yet achieved enlighten, he contemplated and engaged the sentence in a Koan—“The donkey business has not gone yet; the horse business just comes.” By engaging this sentence, he went back and forth between Xue Feng and Xuan Sha for thirty years. During these years, He sat on the meditation mat to practice meditation and wore out seven mats.

This is the fourth example of engaging in Zen and practicing the Way by directly taking on without pretending or copying and having a strong determination to see the field of great silence and tranquility.

Koan Five
Master Yang Shan practiced Zen under the guidance of Master Bai Zhang. He is very articulated and can always give ten answers when he was asked with one question. Master Bai Zhang then said to Yang Shan, “Later, you will go somewhere else to meet the master who can teach you.”

This is the fifth example of truly engaging in Zen and practicing the Way by putting down his/her existing understandings or knowledge.

So Master Bou Ning Yong made a decision to leave Master Xue Dou Xian. He looked at and made a full prostration to Mountain Xue Dou, saying, “I will travel all my life to engage in Zen. If my achievement and merit cannot be better than Master Xue Dou, I swear that I will never return to my home town.” Then he went to Le Tan. Several years have passed, but Master Bou Ning Yong did not resolve doubts yet. Later, he visited Master Yang Qi, and he finally realized the mind and reached enlightenment. After Yang Qi passed away, Master Bou Ning Yong studied the supreme principle with his colleague, Master Bai Yun Duan.

This is the sixth example of engaging in Zen and practicing the Way by a strong determination and never retreating.

One day later, a bucket holder in the bathroom loosened so the bucket fell off from the shelf. At that moment, Master Yun Feng Yue achieved enlightenment and he suddenly realized what Master Da Yu Zhi tried to help him. Then, He quickly went to see the Abbot. Master Da Yu Zhi saw him coming, smiled and said, “Congratulations on your achievement.” Master Yun Feng Yue did not say a word. He made a full prostration and left.

This is the seventh example of engaging in Zen and practicing the Way by supporting the Sangha community with full efforts without wasting time.

Furthermore, there is the eighth example. It is the way by which immeasurable Buddhas reach the gate of Nirvana straightforward. All Buddhas from the past have already reached the gate, and all Bodhisattvas nowadays have attained perfect brightness. The future practitioners should follow this principle to practice.

Master Da Yu Zhi hit the ground with his staff once and got off from his seat.