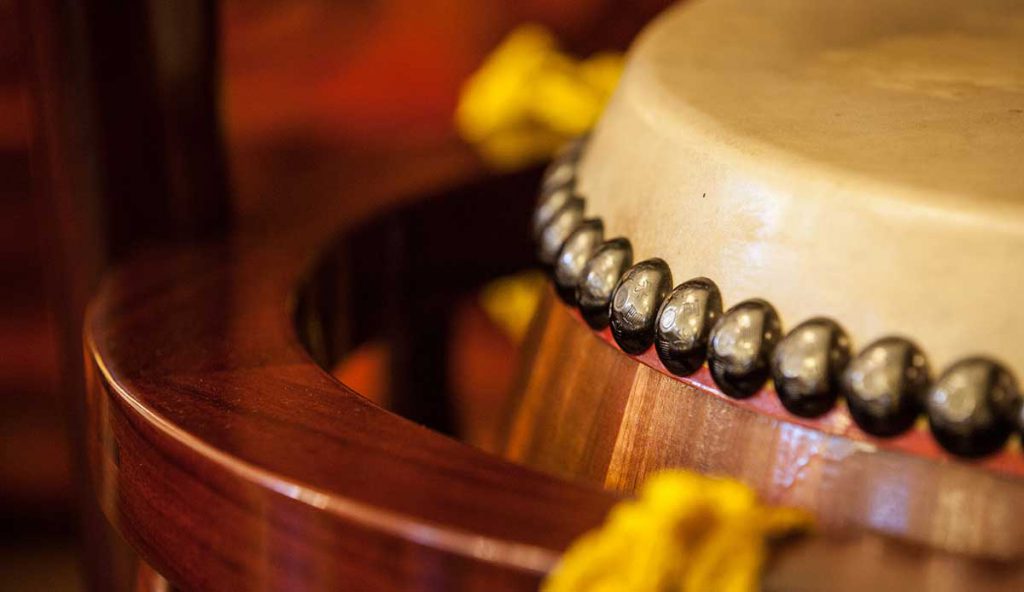 A Bodhisattva on the path of wisdom should exhibit great compassion and aspire to attain Samadhi—not just for one’s own liberation, but also for the sake of liberating all sentient beings. In this way, all attachments to forms are relinquished and any entanglement with worldly affairs ends. Thus, the body and mind are unified, and movement and tranquility become inseparable.

For meditation, choose a quiet place, use a thick floor cushion as a meditation seat, and wear loose-fitting clothing.

Slowly lean forward and sway the torso left and right, then sit with straight spine. The torso should neither lean to right, nor to the left side. Do not hunch the back, or lean forward or backward. The lower back, up through the neck, should align vertically, as with a pagoda. Do not hold the spine and torso so straight and tight that breath is disturbed.

The ears align with the shoulders; the nose and the navel should also align vertically. Then, gently place the tip of the tongue up against the upper palate and close the mouth, gently touching the teeth and lips together.

Keep the eyes slightly open to prevent drowsiness. The “Samadhi1” attained, by doing so, is the most powerful. Since ancient times, many accomplished masters attained Samadhi with open eyes during meditation. Zen Master Fa Yun Yuan Tong also warns against meditating with closed eyes, calling it the ‘Ghost Cave of Black Mountain’ for reasons that are only known to those who have mastered this type of meditation practice.

Once the body is settled in the proper position, and the breath becomes smooth and even, then relax the abdomen.

Do not think about anything. No thoughts about good or evil. As soon as a thought arises utilize the practice of “awareness”; when exercising awareness, thoughts vanish. Over time, by gradually releasing the “grasping mind,” meditation practice naturally becomes a single uninterrupted flow. This is the key to meditation.

Although meditation is “the doorway to peace and joy,” many end up with illnesses because they have not properly utilized the mind. With proper understanding of the practice of meditation, the four elements comprising the physical body (e.g., water, fire, air, earth) become balanced and harmonious. Thus, the spirit is refreshed by the clarity of right awareness. The joy of Dharma will nurture the spirit, resulting in the experience of great peace, purity, and joy. For those who have attained enlightenment, they are like a dragon enjoying a pure lake of cool water or a tiger supported by a mountain. Even for those not yet enlightened, the right application of the method is like the wind that intensifies the fire such that there is no need for over exertion of effort. As long as a practitioner is aware whether his practice is carried out with sincerity, he will not be deceived in his effort.

As the practice deepens in the Tao, various demonic states and conflicts between thoughts that are productive and thoughts that are destructive occur. As long as right awareness is present, however, there are no obstacles. The Surangama Sutra, the Tian-Tai Samatha- Vipassana, and Gui Feng’s ‘Principle of Practice and Attainment’ have detailed the workings of the devil, so those who wish to be properly prepared for meditation disturbances are advised to learn them.

When emerging from meditation practice, gently and slowly move the body. Then, quietly rise to a standing position with ease and gentleness, and avoid making any abrupt or rough movements.

Following a meditation session, endeavor to maintain the practice of awareness and concentration, at all times; as if protecting and nurturing an infant. In this way, the practice of unfaltering awareness can be thoroughly established and upheld more easily.

The development of “Samadhi” is the most important practice objective. Without a firm grounding in the tranquility of Samadhi, delusions will remain. There is a saying in this regard, “Calm the ocean waves to excavate the Mind treasures; turbulent waters make attainment difficult.” When water is calm, it becomes pure and clear and the Mind Pearl naturally emerges. The Sutra of Perfect Awakening states: “The unobstructed pure wisdom only arises through Samadhi.” The Lotus Sutra states:“In a quiet place, one cultivates and constrains the mind, imperturbable, and rests at ease just like Mt Sumeru2.”

To transcend the mundane and attain the holy, rely on stillness. To die peacefully in seated or standing postures, sufficient power of Samadhi is needed. Even the devotion of an entire lifetime to this end is no guarantee against squandering away precious time. How can those who continually postpone this work not encounter the force of karma? Therefore, the ancients said: “Without Samadhi, one must accept defeat at the door of death. Shut the eyes and return empty-handed, as if wandering in an endless state of homelessness.” May all fellow practitioners contemplate this text, again and again, while striving to benefit themselves and all sentient beings. May together, all sentient beings achieve the highest attainment of the true awakening.

Zen Master Chang Lu Zong Ze was originally from the Hu- Bai Province, which was under the direct administrative authority of the central government. At the age of twenty-nine, he took full ordination at the Chang Lu Monastery of Zhen Zhou. Later, he studied under Guang Zhao Ying Fu. One day he attained realization while climbing steps, and Master Ying Fu confirmed his realization. During the rule of Emperor Yuan You (A.D. 1086-93), he lived in Chang Lu Monastery and brought his mother to the monastery as a show of filial respect. He persuaded his mother to enter the monastic order and devote herself to the practice of reciting the name of Amida Buddha. He authored Advocacy for Filial Respect, a one- hundred-twenty-chapter dissertation on both spiritual and mundane practices of filial respect. During the ceremony of Lotus Sutra, he instructed both monastic and lay practitioners to recite the Buddha’s name thousands or even tens of thousands of times each day. As a result of his sincerity, the great Bodhisattva Pu Xian and Pu Hui also attended the ceremony.

Master Zong Ze was also known as Great Master Ci Jue (Compassion-Awakening) and emphasized the complementary approach of combining Zen and Pure Land practices. He authored ten scrolls of the Zen text Pure Discipline of Zen Community and many texts on Pure Land Buddhism. He said, “The methods of reciting Buddha’s name or engaging in Zen inquiry, each has its own principle; though the rivers and the mountains differ, the cloud and the moon are ultimately the same.” He said: “every green willow can anchor a horse, and every house door connects to city of Chang An.”